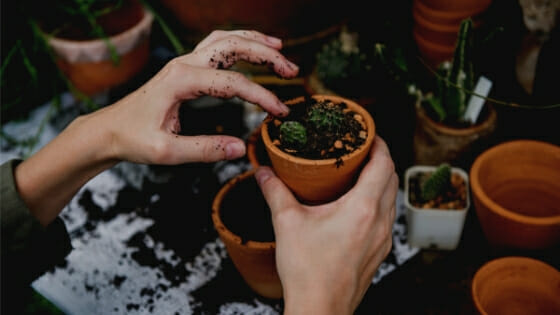 If you’ve ever owned a houseplant or have been in a nursery or greenhouse, chances are you’ve seen fungus gnats. These small flies (1/16 to 1/8 inches) infest topsoil, potting soil, and other sources of organic decomposition.1 Adult are unable to fly long distances, leaving them to remain on top of the soil and plant leaves. Contrary to popular belief, adult fungus gnats are relatively harmless. They consume only water during their 7-10 day life span.2

What are fungus gnats and where do they come from?

Gnats are attracted to two things: light and water. Moist soil is the optimal location for adult females to lay their eggs. A full generation of gnats can be produced in as little as 17 days and often includes generation overlap.1 When breeding is not controlled, fungus gnats can quickly become a major annoyance. Gnat larvae are usually located within the top 2 to 3 inches of any growing medium and primarily feed on fungi, algae, and decaying plant matter.

Larvae may become destructive if organic matter is minimal or overpopulation increases competition for food. They turn to roots and stems, leading to damaged plants or death in seedlings.1 Yellowing of leaves and leaf loss may be an indication of fungus gnat overgrowth. Larvae are also attracted to developing callus’ or directly planted cuttings delaying route production.3

At typical indoor temperatures, the lifecycle of fungus gnats can be completed in three to four weeks.2 Greenhouse growers and individuals who start seeds indoors are the primary victims of gnat overpopulation.

Growing conditions are best when temperatures are between 65 F to 75 F, the optimal temperatures for gnat reproduction. Decreased watering and allowing the soil to dry between watering is the best practice for reducing numbers. After three days, most adults will die due to lack of water and larvae will be left without a moist environment to grow.2

How to reduce and remove infestations

Biological insecticides such as neem oil and pyrethrins require repeat applications and are not recommended for fungus gnat management.2 Incompletely composted organic matter contains gnat larvae and is seen as the primary culprit for major infestations. Improved drainage, cleaning up spilled soil and placing compost piles away from greenhouses eliminate breeding ground opportunities.

Organic control is possible with the use of three products.

Yellow sticky cards, often seen at nurseries and greenhouses, are the simplest control option. They also can help attract and reduce other harmful insects.

Diatomaceous earth is beneficial for moisture and insect control. Fossilized diatoms (microalgae) allow for the separation of different soil components, increasing the speed of drying. Insect control is obtained by diatomaceous earth cutting through insect exoskeletons and rapidly drying them. Since diatoms are primarily silica, they are undigestible and harmless to humans and animals.

Diatomaceous earth is beneficial for moisture and insect control. Fossilized diatoms (microalgae) allow for the separation of different soil components, increase the speed of drying. Insect control is obtained by diatomaceous earth cutting through insect exoskeletons and rapidly drying them. Since diatoms are primarily silica, they are undigestible and harmless to humans and animals.

The most effective method of fungus gnat eradication is the application of nematodes. Nematodes are microscopic roundworms that enter fungus gnat larvae. Creating a drench for application to any growing medium results in larvae death in as little as three days.2

Ensuring the health of plants and seedlings begins with the control of fungus gnats. Learning how to control and eliminate infestations results in intuitive water management practices, making growing and maintaining plants successful.